One of the main goals of GraphQL Modules is to help you organize and better understand the GraphQL codebase. We believe that Dependency Injection fits here perfectly.

We learned not to force Dependency Injection too early in the process, because dependency injection makes sense only in some use cases when your application grows, and using it can be recommended only when your codebase is quite large, and you need to move fast.

GraphQL Modules let you choose whether to use dependency injection or not.

GraphQL Modules depend on Reflect API and specifically design:paramtypes for reflection and for defining dependencies between DI parts, please install and import reflect-metadata before every other module.

If you are using Babel, please be aware that the preset @babel/preset-typescript strips out all the metadata and breaks DI. To overcome this, please use the following plugin: babel-plugin-transform-typescript-metadata.

We won't explain what Dependency Injection is, only how to use it within the context of GraphQL-Modules. You can find a quick tutorial about DI here.

Each term will have its explanation in the following examples.

As you know the structure of GraphQL Modules is flat and so is the hierarchy of Dependency Injection.

Every Module has its own isolated space and reuses a global space defined by Application.

What does it mean?

Whatever is defined in a Module, is only accessible within that module. It doesn't leak to other modules or application. On the other hand, the Module consumes things defined in the Application. 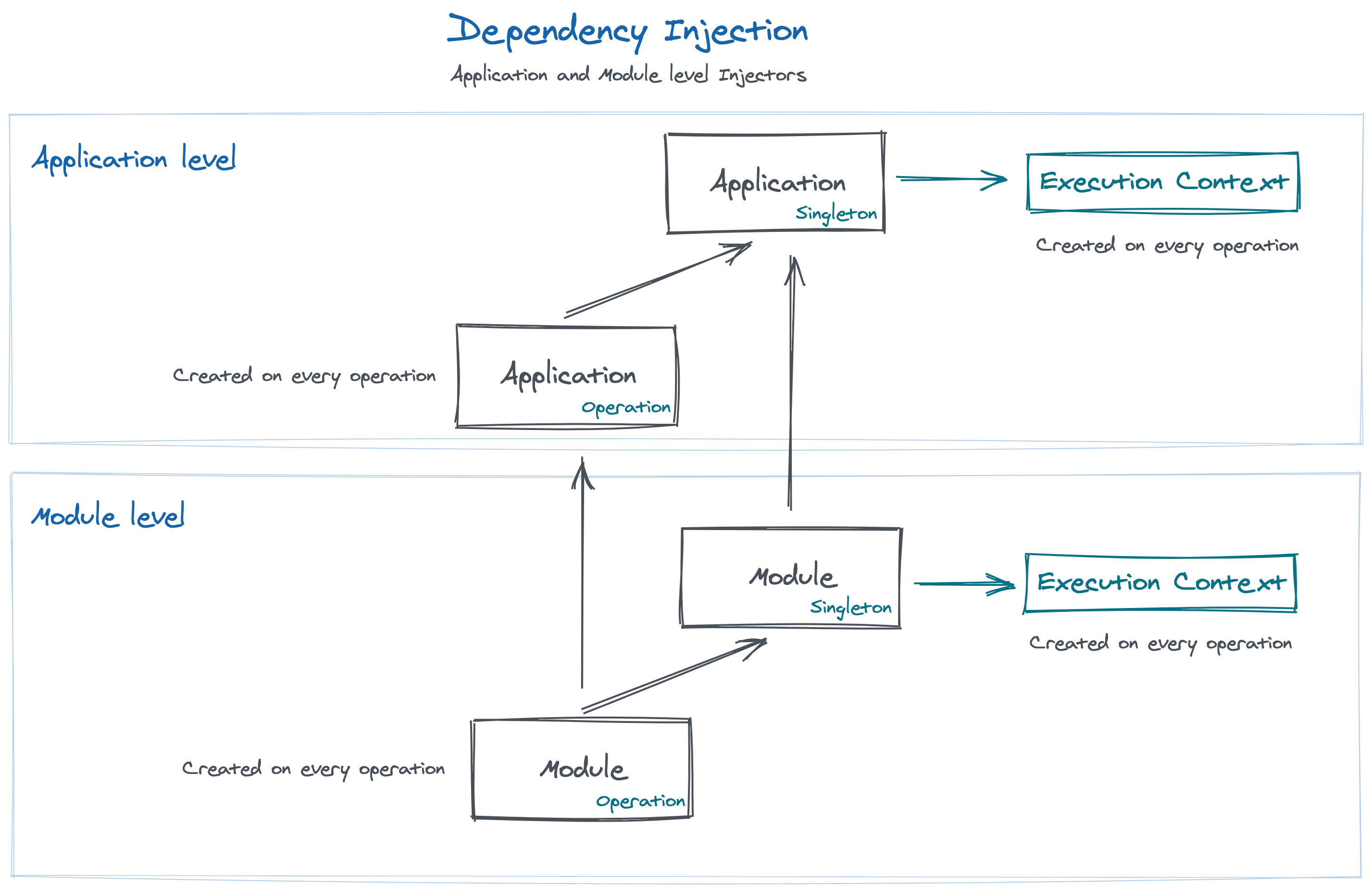 Injector is responsible for registering and managing Services and Injection Tokens (and their values). Basically managing their own space, every Module has its Injector that has one parent which is the Injector of the application.

If something (Provider, InjectionToken) is not available in Module Injector, it will look up the Application Injector.

The building blocks of DI are Providers and InjectionToken.

An InjectionToken is an abstract way of declaring things you would like to live in your Injector space.

A Provider is a way to provide a specific InjectionToken.

They are covered in next chapter.

Every Provider or InjectionToken is created once and the same instance is available for all incoming GraphQL Operations. That's the default behavior, and it's under the Singleton Scope.

In GraphQL Modules, we have two kinds of scope, Singleton and Operation.

Operation scope means that a service is created for each incoming GraphQL Operation and destroyed once the request is resolved. Read more about Scopes in a separate chapter.