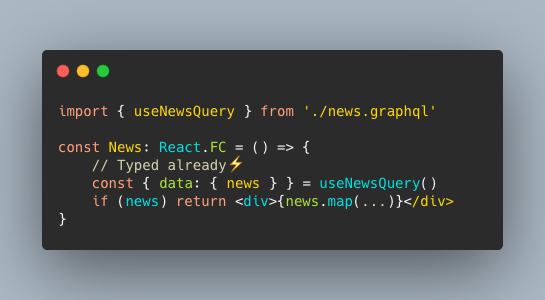 "It's a webpack loader" would be a simple explanation to start. It lets you directly import GraphQL documents and use GraphQL Code Generator's result as below:

The fastest way to try graphql-let is to use the Next.js example from their official repository by hitting the following command.

What does graphq-let add on top of GraphQL code generator API?

Please note that there are limitations, mainly because graphql-let controls output paths. I'd recommend you read the documentation once to get the picture of how graphql-let and GraphQL Code Generator different.

There are other convenient features graphql-let provides to make it more practical.

#import is useful to share fragments of GraphQL document, especially when your project codebase becomes big. If you have a fragment file named partial.graphql like this,

you can share it from other places by importing it.

graphql-let exports graphql-let/jestTransformer that you can use in Jest testing. Please read the docs for more information.

It generates .d.ts files in node_modules/@types/graphql-let by default to apply overload signatures on the function gql. Ideally, it should be available in both a babel plugin and the webpack loader but there needs to be more effort.

When I actively maintained kriasoft/react-starter-kit a few years ago, I realized it's so happy to use Apollo Server and Apollo Client. At the moment, though, Apollo primarily supported HOCs instead of React Hooks, which leads to troublesome to match types of GraphQL operations and fetched data manually. Then, @graphql-codegen/typescript-react-apollo appeared and solved all the problems, except ones that graphql-let deals with later.

The less setup process GraphQL development requires, the more people can adopt GraphQL I believe, simply because GraphQL itself solves many problems web development has been struggling with without it for a decade. I couldn't be happier if a few of you get to know the power of GraphQL through using graphql-let.