The Anatomy of a GraphQL Request

On a high-level, GraphQL servers are pretty easy to set up. Just passing a GraphQL schema and starting the server does the job.

However, for many use-cases, such a setup might not be sufficient.

Let's dive into each of the phases of a GraphQL request and learn how enhancing each phase can help to set up a production ready GraphQL server.

Note: While GraphQL can be done over almost any protocol, this article focuses on the most commonly used protocol GraphQL over HTTP. However, most knowledge can be transferred to other protocols such as GraphQL over WebSockets or other more exotic ones.

Clients send HTTP requests to the server with a payload that contains an operation document string (query, mutation, or subscription), optionally some variables, and the operation name from the document that shall be executed.

When the requests are executed via the POST HTTP method, the body will be a JSON object:

However, when using the GET HTTP method (e.g. for query operations) those parameters can also be provided as a query search string. The values are then URL-encoded.

The GraphQL HTTP server's first task is to parse and normalize the body or query string and furthermore determine the protocol that shall be used for sending the response. The protocols can be:

Not officially in the specification, but also used is text/event-stream for event streams (e.g. when executing subscription or live query operations).

After parsing and normalizing the request, the server will pass on the GraphQL parameters onto the GraphQL engine that will parse the GraphQL operation document (which can contain any number of query, mutation, or subscription operations and fragment definitions).

If there is any typo or syntax error, this phase will yield GraphQLErrors for each of those issues and pass them back to the server layer to send those back to the client.

For the following invalid GraphQL operation () missing after $id at line 2):

The error will look similar to this:

As you can see, the error messages are unfortunately not always straightforward and helpful. The location can, however, help you track down the syntax error!

The AST is a handy format that is used for the follow-up phases validate and execute.

For our operation it would be identical to the following JSON:

This procedure is performed by the parse function that is exported from graphql-js. Other languages that are orientate themselves on the graphql-js reference implementation have a corresponding counterpart.

As an example the following operation is missing a definition for the $id variable:

If the AST of that operation would be validated the following error will be raised.

In case any error is raised the errors are forwarded to the HTTP layer which takes care of sending them back to the client over the determined protocol. Otherwise, if no errors are raised the execution phase will be performed next.

This procedure is performed by the validate function that is exported from graphql-js. Other languages that are orientate themselves on the graphql-js reference implementation have a corresponding counterpart.

In the execution phase we are actually resolving the data requested by the client using the parsed and validated GraphQL operation document AST and our GraphQL schema, which contains the resolvers that specify from where the data the client requests is retrieved.

Previously, the HTTP request has been parsed and normalized, which yielded the following additional (but optional) values: variables and operationName.

If the GraphQL document used for execution included more than one executable mutation, query or subscription operation, the operationName is determined to identify the document that shall be used. If the determined executable operation has any variable definitions, those are asserted against the variables values parsed from the HTTP request.

If anything goes wrong or is incorrect an error is raised. E.g. the variables provided are invalid or the operation that shall be executed cannot be determined as the operationName is invalid or missing.

Such an error will again be forwarded to the client by the HTTP layer.

Otherwise, if no error occurs, the field values will be resolved with all the parsed and provided parameters. The phase yields a single or stream of GraphQL execution results.

The HTTP layer forwards those to the client that initiated the request.

This procedure is performed by the execute and subscribe functions that are exported from graphql-js. Other languages that are orientate themselves on the graphql-js reference implementation have a corresponding counterpart.

Why Do We Want to Override Different Phases?

Parsing a GraphQL document string comes with overhead. We could cache frequently sent document strings and serve the document from the cache instead of parsing it every single time.

Similar to parsing, validating a GraphQL document AST comes with an overhead. We could cache recurring document ASTs and server the validation result from the cache instead of validating it every single time.

You might wanna restrict what kind of operations are allowed to be executed. E.g. If we we only want to allow query operations, we can provide a custom validation rule that yields errors as soon as a mutation or subscription operation is encountered.

We can serve frequently executed GraphQL operation results from a cache instead of calling all our resolvers and fetching from a remote database/server every time.

We can collect statistics by measuring how long it takes to resolve each field in our documents' selection set and narrow down bottlenecks.

We could customize the algorithm that is used by graphql-js in order to add new features or make it more performant e.g. by using graphql-executor.

Use Envelop for Extending the Phases

While making our GraphQL servers production ready and working with our clients we discovered that we were writing the same custom code over and over again.

Envelop provides us a user-friendly way of hooking into the before and after phases of parse, validate, execute and subscribe. 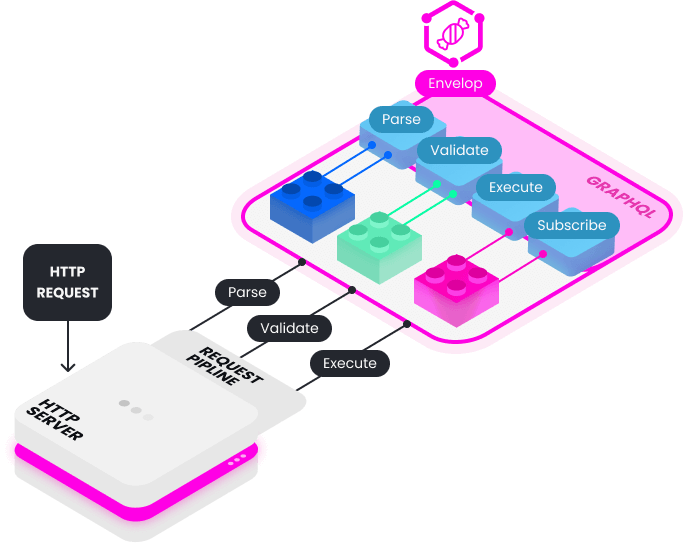 Furthermore, the plugins can be easily shared across projects.

You can learn more about Envelop on our introduction blog post or by visiting the Envelop documentation.

Why Is GraphQL Yoga V2 so Important?

As you might have noticed we adopted GraphQL Yoga to The Guild ecosystem quite a while ago. We have been thinking a lot on how version 2 should look like and while building and using envelop within our customer projects we realized a few limitations that can only be solved by owning/wrapping the whole HTTP GraphQL request pipeline.

While envelop is strictly about wrapping the graphql-js core functions (parse, validate, execute and subscribe). GraphQL Yoga will provide a unified plugin interface for writing plugins that hook into ALL of those phases envelop has plus all the encapsulated phases for parsing and normalizing the HTTP request, allowing you to write powerful GraphQL servers and making features such as Automatic Persisted Queries or Response Caching more powerful and easy to adopt.

We are excited to announce more details soon.

How not to learn GraphQLCaching data with DataLoader